Here are a few of the arcade machines in my collection. My plan is to break this area into several pages (probably by date), and to show more detailed pictures of the machines. I also plan to add to the descriptions. In the meantime, please excuse this "work in progress!"

Check out www.logansarcade.com to see more pictures of the game room! 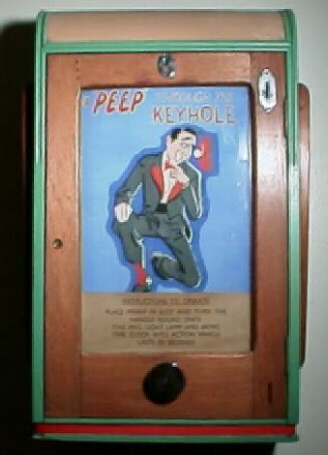 Circa late 1930's, early 1940's is this adult entertainment machine. For a penny, British folk could gaze at nude women. The instructions on this A PEEP Through The Keyhole machine read, "Place penny in slot and turn the handle round once. This will light lamp and bring time clock into action which lasts 30 seconds." 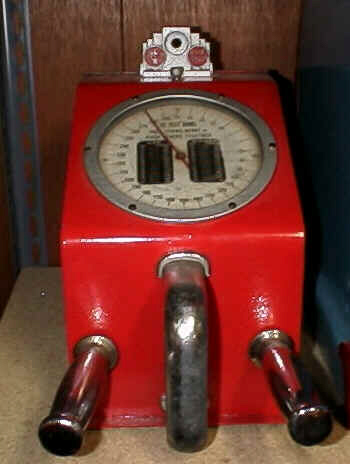 How strong are you? Do you need to come here to find out?

This Gotleib Strength Tester is about 70 years old. Drop in a penny and squeeze the handle or press the metal rods together! 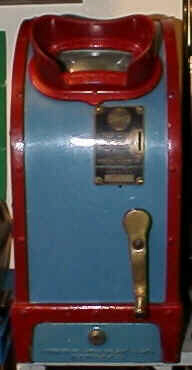 This Mutoscope, made by International Mutoscope Corporation is about the same age as the strength tester! Put in a penny, turn the crank and watch the show!

An inside view of the Mutoscope. It takes a lot of cards to make a movie!

This Midget Movies dates back to the 1940's. For a dime (originally a nickel) you can watch one of the three short 16mm movies! I gutted the marquee repainted all the pieces, replaced all the colored acetate, relined the interior with stretch velvet, put some "new" 1940's pictures in it, rewired the light, touched up the side art, cleaned/conditioned the wood and refinished the viewer!

And here is the magic that makes it all possible. A 1940's Capital Projector with integrated endless loop film feeder. The film feeds from the center of the hub and then returns to the exterior so that it is always ready to run again! After each show the projector shuts off (thanks to a clever "microswitch" that senses a cut in the film). This allows for a "new" show each time you put in a dime! 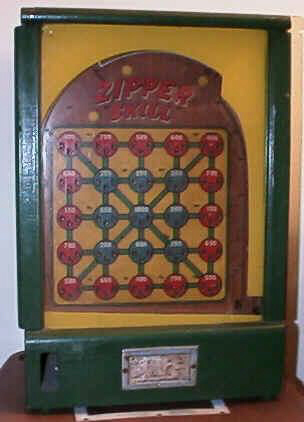 This Zipper Skill gambling machine is from the 1940's. It takes a coin and then releases balls for you to guide to different spots in order to score points. 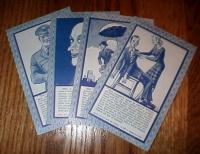 Knock down the ducks with a penny! 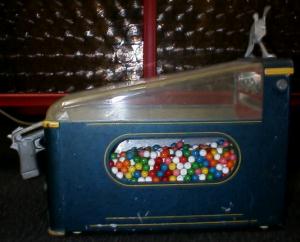 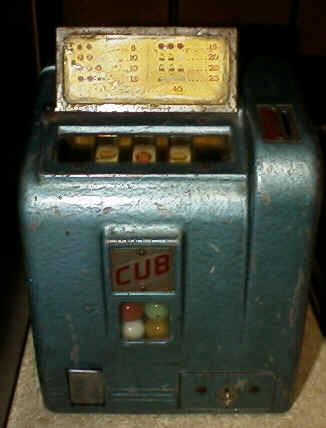 This Cox Trade Stimulator is from the mid 1940's. Customers deposited their coin (usually 1-cent) and then when the dials spun, they hoped for a winning combination to win a payout from 1 to 40 cents! There were also designs with cigarette cartons on them. Since every play got a gumball, they were legal -- for a little while. Eventually the law caught up to these machines and they were outlawed. This example is particularly exciting because it is a 5-cent machine! 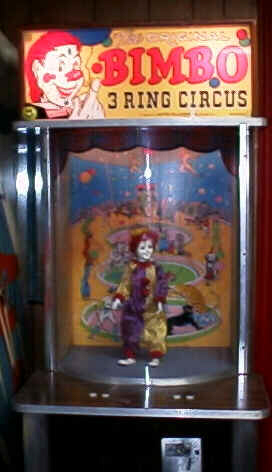 Bimbo was popular in the 1950's. Press his 4 buttons and you can control his dance!

The view inside this machine is amazing. The backlit playing area provides flying challenges while you control the speed and altitude of a model plane. You score points by flying over the mountain, through the airplane hanger, over the mountain and under the bridge! 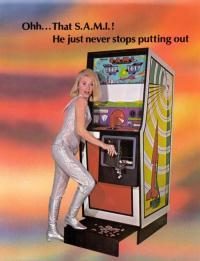 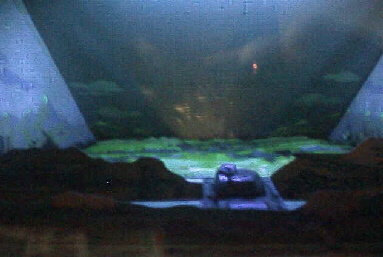 The view from the inside of this machine is less spectacular than that of the Stunt Pilot. However, still amazing by today's standards! Surface Air Missile Interceptor players aim for planes that are projected onto a screen on the playfield. You control a missile on top of a tank. After launched, the missile turns into a cartoon graphic and actually appears to fly through the air at the planes. If you score a hit, the plane is replaced by a colorful explosion! 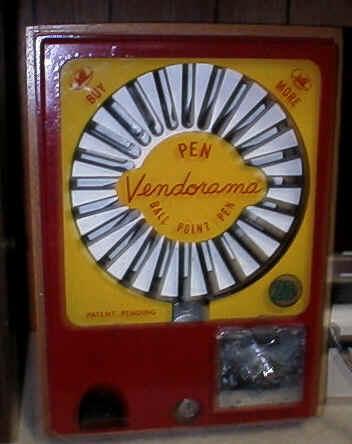 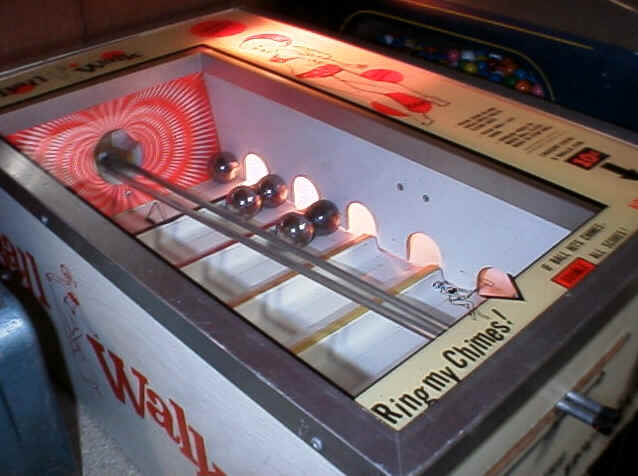 This Ball Walk was made by COINTRONICS in the early 1960's. Try to keep the balls balanced on the double bars as they "defy gravity!"

I have both versions of Intrigue, made by Computer Logic in the early 1970's. The version (above) features a baseball theme. There are several light bulbs behind the two screens that blink on and off in order to animate the action! Players use the remote (below) to start the pitch and then to swing!

The other version of Intrigue has a Skeet Shoot theme (below) and very cool graphics too. I will post pictures of it running soon. But it's interesting to note that the Skeet Shoot version does not have a colorful overlay like the baseball version. 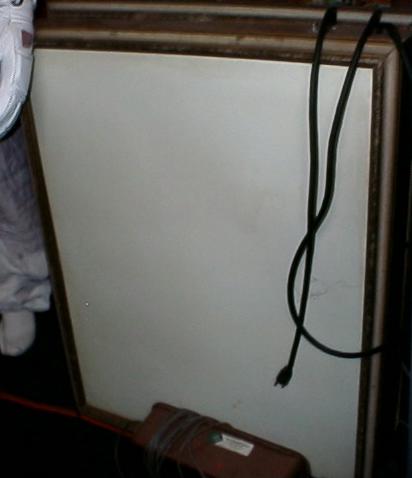 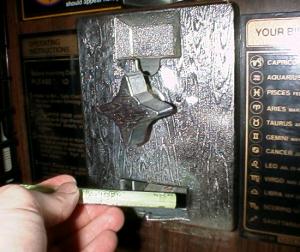 For a quarter you can test your reflexes. For 50 cents, 2 people can go head to head! 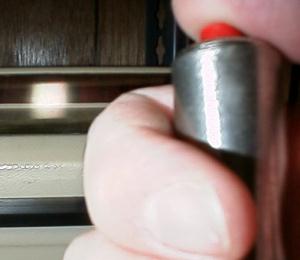 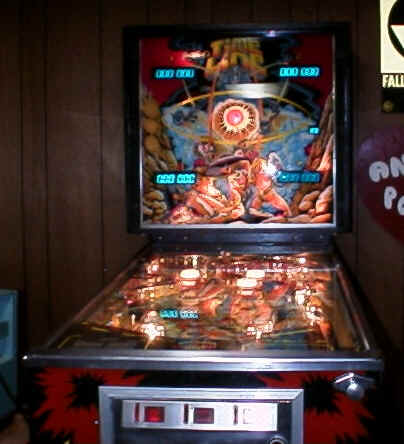 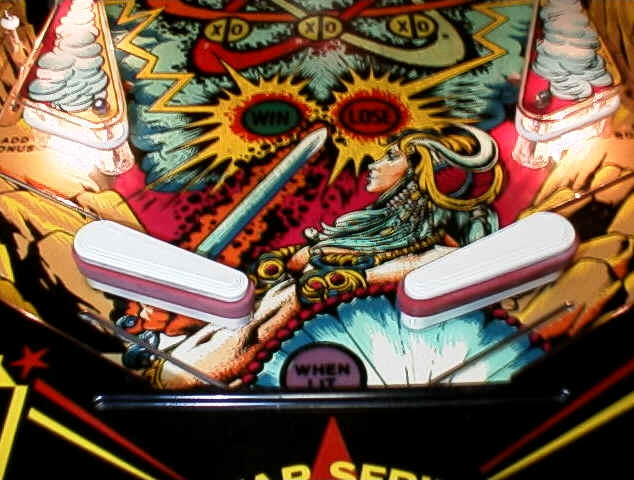 This Time Line from 1980 uses the same boards as Haunted House, The Black Hole and some other classic Gottlieb games! 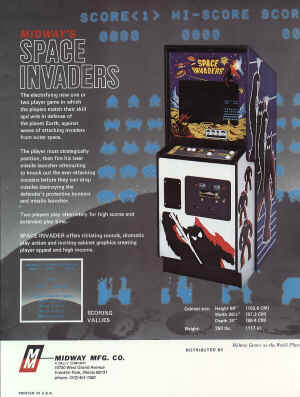 This Space Invaders from 1978 is my ONLY video arcade machine (the rest are Electro-Mechanical)! 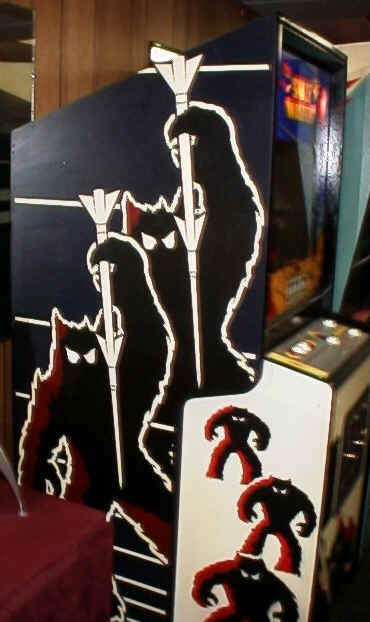 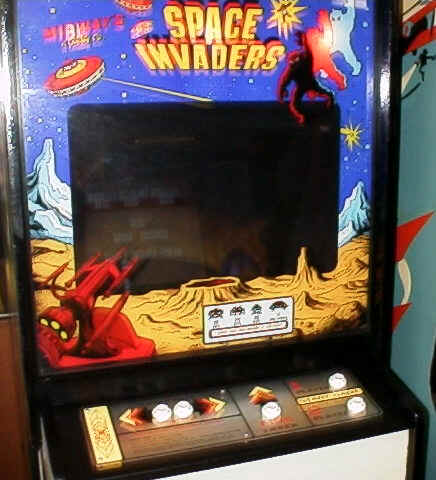 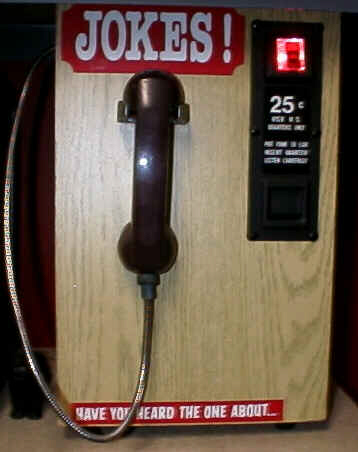 Deposit your coin and listen to jokes! This machine is from the 1980's.

Here are some quick shots of a few of my recent aquistions. More detailed pictures and descriptions will follow soon! 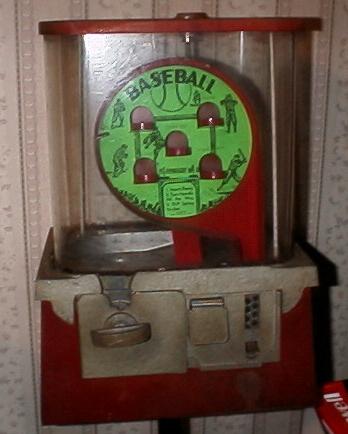 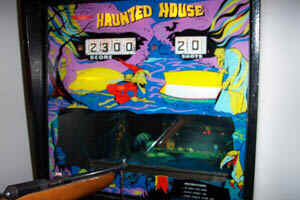